Life is good. No track to clean no joints to worry and fuss over, no jumpers to solder. BATTERIES!

Spent a grand Sunday afternoon running the converted Pacific and U25 on batteries from a trailing car. I did more switching and yard work than ever before due to the lack of grief from inconsistent rail current. IT WAS GREAT!

I am a fervent convertee. Am going to work to get the rest of the locos adapted. I will keep them dual useage as I have friends that still run track power…ain’t seen the light yet! At least not until they see mine operatin! hehe

Am itching to try the SD45s on battery power as it has little grade trouble except when hauling 40 cars up the south loop from the hard side! Will see if there is any difference there. I seriously doubt it based on what I saw yesterday.

Funny thing is…near the end I couldn’t get that loco to pull a dang thing. Finally disconnected the string and it went down the track for about 50 feet then died! Twas then I remembered…BATTERIES!

Almost three hours of run time on two 9.6v Nimh batteries in series. They had only been charged once about 1 1/2 months ago and had been left sitting except for use on the bench when constructing the battery car and making tests on the test track.

Looks to me like this is the real deal!

Thanks for the push guys! Yell when another prospect comes nosing around…I’ll help!

I bet the smile on your face is about as big as it can get.

Next thing we’ll know, he’ll be putting batteries in everything he can find. Its suprising how much space is in these locomotives, even critters, for some batteries and an RC unit.

Trouble is I need more batteries to fit the locos and cars now. Hmmm what to sell off to fund them?

Good point. Maybe Santa can bring you an early present.

Ive been battery powered from day-1. When I started this whole LS train thing, I had dozens (and I mean dozens) of packs from my RC car racing days. 2 of them and I get 14.4v, rechargable. The problem with them was space, they were big for their capacity. Now Im switching over to NiMH, which have the same, or larger capacity, in a smaller area. I even think I can get onboard batteries into the Whitcomb (maybe, dont quote me on that). But I do have them on the bed of Goose #6 in a wood box.

I did this to a Trail Creek Whitcomb a couple of years ago. 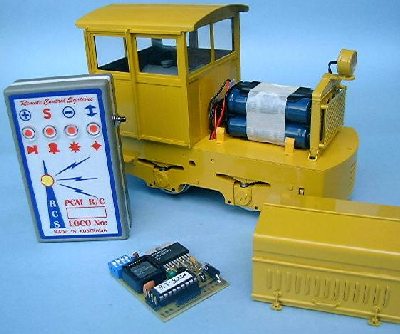 I used rechargeable 4 x 3.6 volt 800 mah “AA” Lithium Metal batteries. They fitted neatly under the hood. I had the R/C equipment under the floor between the motor and floor. 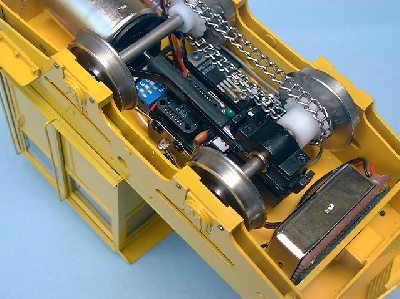 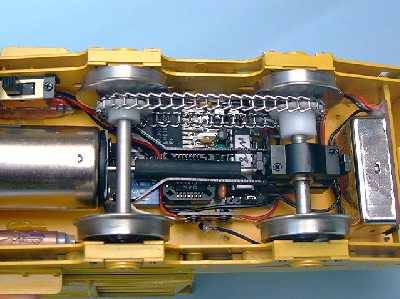 So it can be done. Don’t know about the Accucraft Whitcomb though. I believe the hood area is taken up with an oversize motor.

Why don’t you dispose of your “Now surplus to requirements” track powering equipment?

Ive got the Trail Creek one myself, and have the RCS underneath like you do, but currently (ha!) I have batteries in a trailing car. Need to figure out how to get them onboard.

I would dispose of the track power stuff but I still have a number of locos as yet unconverted to battery and still need to be exercised! Also the friends as yet are all still track powered so to keep them operating I’ll need track power for a while.