AML GP60, any news on them lately

I have seen that the arrival of the new AML GP60is is close at hand. Anybody heard when they will hit the shelves? With a serious lack of pictures of the actual product we shall receive, I am hesitant to put out the $$ yet. All I seem to see are prototype test shots, like an NS unit with the ATSF/SP roof air conditioner and Prime beacon light or pics of models that are not G scale. Anybody heard anything or have pics of them yet? Mike

I’ve had two friends get ahold of the demo and got to run it. Colin got it and so did Robby. I think there were videos on facebook in the group gscale.net It’s coming soon and looks good.

If you are on Facebook RLD hobbies has some video’s of it running on there layout along with some pictures.

Looks like a nice piece but it still is not the finished product but I would assume it is close.

Just wondering if those engines come DCC ready, or are they just wired for track power and you will have to equip the engine to your operating system of your choice.

Mike, I’m not sure if they will have individual parts or not. But, that beacon doesn’t flash like the USA Trains SD40-2. It was just for looks. Just like the ditch lights on it.

John, the specs on Robby’s site say it has a plug and play modular pc board. https://www.rldhobbies.com/aml-g801-09a-1.aspx

This engine is heavy too. I’ve held it. It weighs close to what a dash 9 does. Also, the top cover is held on with small magnets. I thought that was a pretty cool feature.

no operating beacons can be changed to operating, simple job, done it many times in smaller scales. But we seriously lack certain details in G scale like beacons and so forth. Hard to 3d print an amber translucent dome so it can be lighted.

You can get RC car beacons in various scales pretty cheaply

You can get RC car beacons in various scales pretty cheaply

I like the looks, just wish it said the size (measurements) in the description, plus I hate to order from China, I would pay more for a U S dealer.

Most dont have the “scale” shape and look of the Prime beacon, which to me is more important than it actually working, at least at first. I can make generic beacons and such, but none resemble the real light(which I have both versions in my collection) Thanks for the link though. Mike

Here is the prototype of the beacon that AML has on the GP60. This one came off BN 1410, thats one of her numberglasses as well. 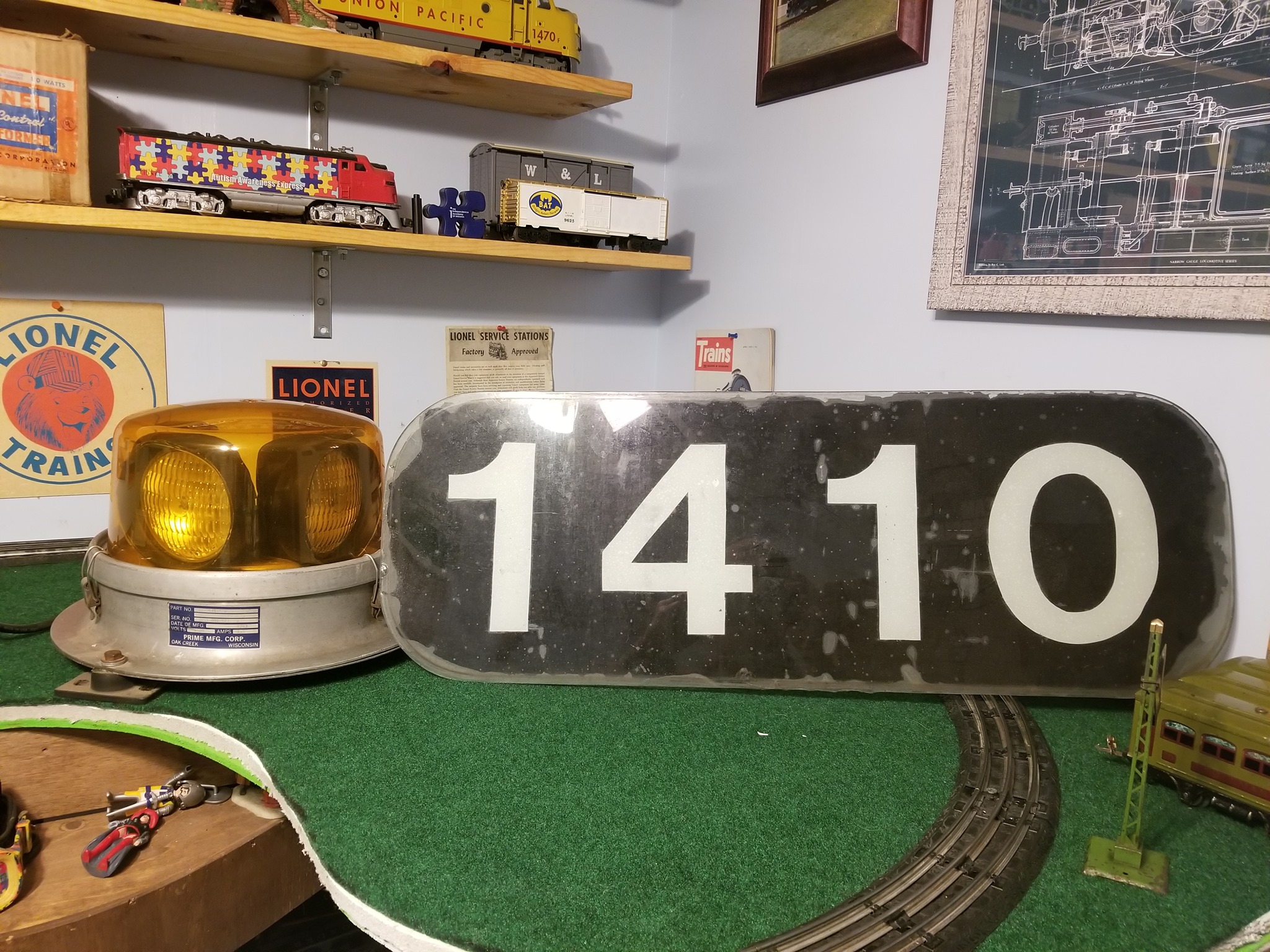 no operating beacons can be changed to operating, simple job, done it many times in smaller scales. But we seriously lack certain details in G scale like beacons and so forth. Hard to 3d print an amber translucent dome so it can be lighted.

I recently was thinking about this problem and also happened to be playing LEGO with my oldest… I found a couple parts that ‘might’ work as a amber translucent dome.

This is a blue one, but you get the idea. I would have to measure it at home to give you a final size, but I’m pretty sure it a 3mm LED might fit inside. LEGO never produced a orange one, but the trans-clear would work with a orange translucent paint over the top (or a orange SMD/LED inside)

This one is in orange, but it isn’t open on the bottom like the one above. It would require drilling out the stud to open it up.

The base would have to be 3D printed, but I think this is about as close as we can get to a decent looking beacon.

That might work for the rounded dome “bumble gum machine” rotating beacons used in the earlier days. But the Prime dome is much flatter shape wise, one might be able to file down the rounded top of the Lego lense to get a flatter top. Hopefully AML/Accucraft will offer some spare parts on the website since they have the scale light tooling already done. If they truely want to “push” the scale diesel movement forward, maybe fill in for the loss of Aristocraft and lack of new models from USA, Bachmann or LGB, details parts along with a follow up engine that doesnt take a decade to achieve would be the next steps. Lets hope the GP60 sells well. I suspect my friend will get a NS one and I may get a SP version.

Yes it’s not a perfect flat profile of the Prime beacon, but I think it’s a starting point. I hate to say this, but us super detailing modelers in 1/29 are a very, very tiny minority. As a BN modeler, I need beacons as well.

I highly doubt that AML is interested in the detail part market. I think it ‘might’ be possible to get the beacon at some point as a stand alone part, but I’m not holding my breath for anything special like a scaled etch radiator screen, etc.

I agree, I am not holding my breath. The 3d printing market gets us the base, thats the easy part. Its the amber lense we need a source for. There was a guy in Germany that found the bottom of some kind of amber translucent bottle that was nearly to scale, then added his own flasher circuit and base to make a proper working Prime beacon. Be nice to see something like that on the market, even if its cottage industry made, which is what I think our scale will be mostly now, with occasional new items from bigger companies.

Making a mold using a piece of pencil eraser as a master, then casting it in clear resin might be a good starting place.

Anyone hear anymore news from AML? Sent them emails asking what the current schedule is. No reply. The last I heard they were on the water but that was back in April/May. They should have been here by now.

You might try calling Robbie over at RLD Hobbies or messaging Channing at Accucraft directly. I know lots of stuff has gotten held up for a month or more just trying to get unloaded at the west coast ports. I may message him as well, I would be interested in a Santa Fe one, but I want to see pics of the production model. Not the pre production that was running at RLD. So much can change for better or worse between production and the prototype. Mike

Thanks, I’ve emailed Robbie and he’s not heard anything from them. I believe I posted on Accucraft’s Facebook page with the question as well with no reply. I was hoping for a picture of a production sample prior to the container being stuffed and shpped. That would have been a good tease to all us model railroaders.