Who out there has put RC into a Connie. I’ve got one (had it for a while, finally getting around to it), and was wondering how much I need to tear apart to make it work?

I assume I can fit the RC gear in the loco, and have sound and batteries in the tender?

Hi Bob. Here is roughly how to do it. Variations are likely to occur depending on what sort of batteries you need to use. Currently I am using 12 x 2100 mah “AA” NiMH cells in twin stick format along each side of the tender. There is plenty of room in the tender for everything. I do have specific instructions available that I will shortly have ready as PDF files on the RCS website. In the meantime here is a sequence of pics that will help. You do need to check all gearbox screws first up. 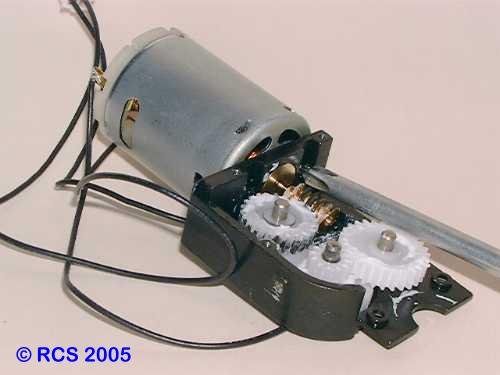 This Bachmann pcb MUST be removed from the motor.

The motor must be suppressed with .1 Âµf caps as shown here. It is most important to add the ground wire to the motor case.

Motor wires are routed back to the firebox like this.

I added an extension to the rear tender beam for the charge jack.

Cable hole is shown here with a view of the oval speaker I originally used. I now have a round one because the "AA cells take up less space.

If you do choose to use twin stick Sub C batteries they need to be canted over like this.

I installed the two switches in the water filler hatch along with the code selection switch.

Incidentally I used the original metal coal load as the antenna. Works just fine for me. I hope that is of some help. Tony Walsham.

Thanks, Tony. That helps a lot. Probably start dismantling the Connie tonite.

It’s a lotta work, but if I can do it anyone can. Only difference in mine was a NiHm battery pack, bigger speaker for the Sierra sound, and a built up coal load on a peice of foam. My antennae connection runs through the wheel pick-ups in the tender to the track. 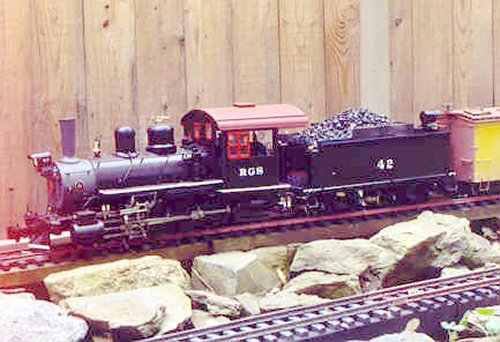 What are the biggest pains in taking the Connie apart? Ive got mine on the bench ready to go…

No real pains in disassembly.

When reassembling make sure piping goes back in correct place. Sand lines at front require care.

How about the original procedure?
Want the coal pile mod and headlight moving procedure, too?
TOC

While doing some conversion work on one of the new Bachmann 1:20 scale 2-8-0’s, I found the motor to be loose on the gearbox.
This is a new design gearbox mount from Bachmann, and bugs may have inadvertently crept in to the assembly process.
The following is the procedure I used to adjust this and subsequent units. First is the boiler removal, which is about the easiest Bachmann Large-Scale to disassemble to date.

Check motor for tightness to gearbox as outlined below:

Pull the lower gear cover, 4 screws, and front support bracket on top of frame to gearbox, 2 screws, lift the motor/gearbox off, removed 4 screws on one side and 2 on the other of the gearbox, separate the gearbox halves. The motor screws are located inside the gearbox. I removed the screws, locktited (222) and lubed before re-assembly.

When re-assembling, make sure the sander pipes from the sandbox on top of boiler fit into holes provided in frame just forward of valve gear support bracket. They may spring backwards and rub on lead driver.

You are correct - DO NOT DROP THE JOHNSON BAR SCREW. Twas the last step and I droped it. Spent about 20 min shaking that dude out. Woulda been faster to take it back apart.

While you are at it, be sure and check all connecting rod and counterweight screws. I found three loose ones on the left side. This may be the same problem that the mongrel and 4-4-0 have - the rotation of the driver is counter to the screw threads on the left side.