Summer Fun on the Triple O

I’ve been worry over projects not working out for so long, I thought it was time to share a bit of fun, an even we call “Little People on the Railroad Day.” The name comes from O.D., who, many years ago, called my PLAYMOBIL collection the “little people.” The collection is the combined Wild West collections of my brother and I, which we bought and played with for a decade. They date to a time when Westerns still showed up on TV, and, in Germany, where PLAYMOBIL originated, Karl Mai’s “Winnetou” series had returned to some popularity. 2-3 times a year, we bring all the “little people” down off the shelf (even PLAYMOBIL gets brittle with age!), and put the Triple O in “Full Dress Wild West.” It takes about 2 hours to get it all down, then I turn the railroad and the PLAYMOBIL over to the kids. The late afternoon always comes too quickly, and the cowboys, lawmen, outlaws, soldier, and Indians have to return to their shelves. This time, only the boys helped me. The girls had other projects and friends to see. While it led to less referee duty, it was a poignant reminder that time marches on…“Sunrise, Sunset” from Fiddler on the Roof has been running through my head today.

OK, let’s take a tour. There are a number of Mik projects as well as other things that owe their existence to members of this forum. I thought you might enjoy seeing the fruits of the collective intellectual labor!

The day begins with laying out drop cloths to catch pieces and parts and collecting tubs, trays, and plastic bin lids to transport thing to railroad: In Wild West mode, the towns of Haluku’ilio and Pu’u’oma’o become Dog Wallow and Green Hills, respectively, and the M&K Sugar Co. (last summer’s COVID build) becomes the M&K Mine. 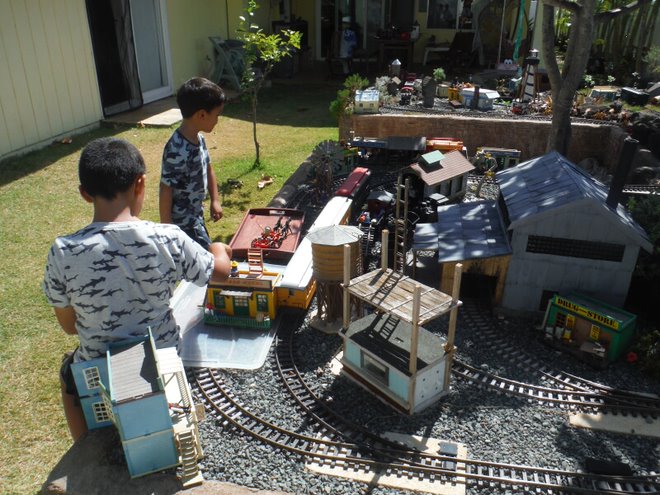 Battery B, 1st U.S. Artillery stood guard on the plateau connecting Hell’s Mountain to Dino Mountain, as a squadron of the 7th Cavalry heads out on patrol. This plateau was another LSC project: For those wondering, yes, the patrol got ambushed by those hombres atop the abandoned mine shaft. O.S. made that shaft years ago by covering a piece of foam with QuickC rete and declaring it done!

At last, the boys brought the Triple O to full dress: 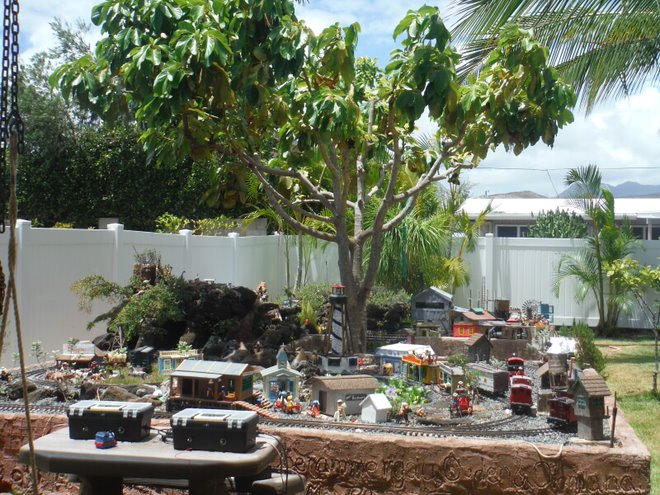 The pictures cannot convey the sense of life that having “little people” populating the railroad doing Wild West things brings to our little railroad. Later in the Day, Y.S. brought the neighbor girls over (3 and 5), and their “Oh, wow!” is perhaps the best compliment we got.

At this point, I turned it all over to the boys for “operations.” I set out all the US profile things we own and simply see what they will do with it. The closes we got to “operations” was a company of Dog Wallow Volunteer Militia that embarked on a freight to help get a supply column through to Fort Union. Non-railroad operations did include a pitched battle for the fort, the sacking of Dog Wallow, and the near sacking of Green Hills. Kid-zilla did run some freight service…

…but staging bank robberies was more fun. I have to watch “Butch Cassidy and the Sundance Kid” with him, I guess! You’ll note the Mik project, “Mama’s Bakery No Ka Oi” in the background. Some of the planks have come loose, but this craft-stick-on-foam creation has held up well. You can see it is supplying the local saloon, too, belwo: 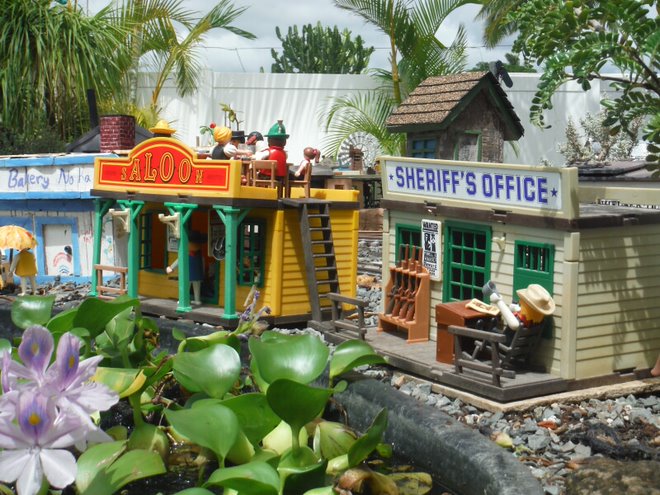 Back in Green Hills, the Triple O crew prepares to inspect a newly acquired and gently used Austrian loco (Is any LGB heavy layout complete without a STAINZ somewhere?): 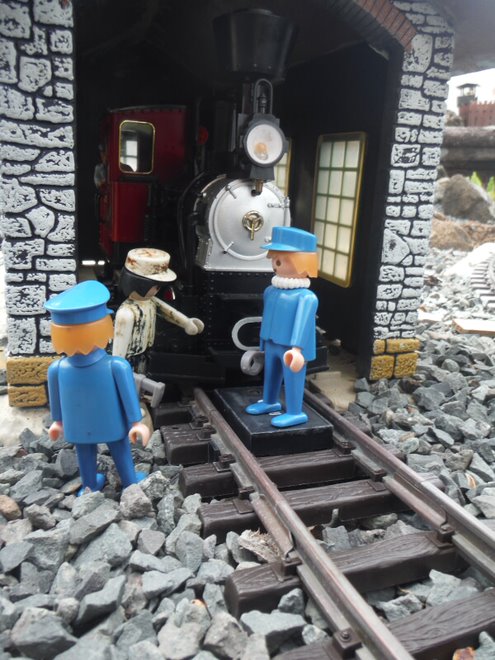 O.D. and I gave this old STAINZ a once-over. We hold the parts to restore this refugee from 1981. There is talk of new paint, too. Different story… …maybe she spotted that drawn pistol at the Drug Store and realized a sale was about to go very, very poorly! Meanwhile, Olomana drags a train out of the mine. I had intended to put another LSC project, our m2075/STAINZ hybrid out, but it sheared off the stack entering the building I designed around it! Ooops. Basically, the building settled, gravel filled under the track, with the net result only Olomana and Diesel Dan can pass through.

O.S. spent most of his time directing the attack on / defense of Fort Union, with occasional breaks to send war parties into the various towns. Because I was busy moving figurines alongside him, these struggles did not make it to the camera.

For his part, Kid-zilla made sure Green Hills Yard stayed in efficient operating order between attempts on the bank. As the second shows, I think he did a good job! 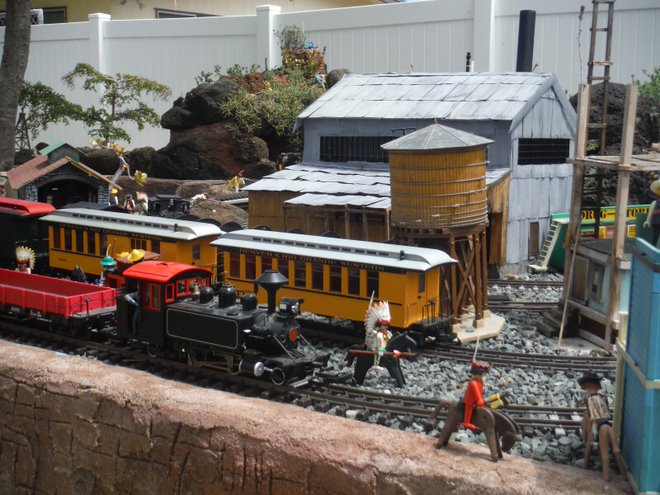 The rest of the photos are little scenes the boys created, one of which actually involves trains: Though not really railroad pictures, it really brought home to me how important the environment is to really bringing model trains to life, whether it is figurines or plants or train orders.

Before everything went back on the shelf, Bubbles took a spin (VIDEO: Bubbles Takes a Spin).

By about 1500, sunburned, thirsty, and tired, we sounded the last whistle and drew the curtain on this iteration of “Little People on the Railroad Day.” Not a lot of serious modeling, but a lot of serious fun! I hope you don’t mind my sharing it with you, and that you may have enjoyed seeing the various Mik Builds and other projects in action. There is a lot of shared knowledge and not a few surplus parts from members of this community on display in these photos, so this is one way I have to say “Thank you!”

And THAT…is what model railroading is all about!!!

I think Ken said it best, Eric. I enjoy seeing your family having fun together on the layout. We could all learn a lesson from your clan.

Awesome job, looks like almost everyone had a great day, thwarted assorted robberies and thievery by the good guys , a project or 2-3 for you, raise mail or lower track, plus fix smokestack. Very good vibe happening on the triple 0. Thanks for sharing this Eric!!

Nice. Looks like a fun time wuz had . . . . (http://largescalecentral.com/externals/tinymce/plugins/emoticons/img/smiley-smile.gif)